One of the recurring questions in the internet world is - how do we protect children and teens from the perceived evil lurking out there in cyberspace?

While it's a perfectly valid concern, I don't think it's qualitatively different from the larger concern of how do we keep our children safe in the world at large?

I started thinking about this again following an email exchange from a public librarian wanting to block MySpace and YouTube and an interesting article from the Christian Science Monitor - Internet filters block porn, but not savvy kids. The solution favored by many parents (and as a result schools and libraries) is to want to block everything that might possibly be a threat regardless of the positive aspects. A similar response in the real world would seem to be to lock a child in his room with no tv, radio, phone, internet, or social contact until he turns 18. Sure he'd probably be SAFE but he'd also miss out on a lot of experiences that could make him a well-rounded adult who could contribute significantly to society.

I also think that indiscriminate blocking can lead to a rebel attitude in young people. If we indiscriminately block everything that might possibly be objectionable to anyone, we're only going to encourage our creative young people to find ways around the filters. And when they do, and discover that what we're blocking is trivial, they're going to think we don't know anything. And they may well be less likely to listen to us when we try to warn them about something that's truly significant.

There's no indication that either the internet or social software is going away in the near future. So, the question becomes how do we integrate it into the educational and social lives of our children? IMO, the best way to do that is not going to be blocking it all and pretending it doesn't exist. Even if that could be successful, we'd only be sending naive adults out into the world. Rather we want to work with them to show them the pros and cons of providing information about themselves and interacting with strangers online, and how to set boundaries and behave responsibly in these new virtual environments.

And that's going to take educated parents, teachers and librarians. As I stated in a previous blog entry on March 2, internet fears are nothing new. We owe it to ourselves and our children not to remain ignorant while letting our fears get the best of us. Instead we need to take the time to explore some of the new tools and resources so we can better understand both the allure and possibilities. Only then, can we help our children make good decisions.

Check out some of the library pages on MySpace:
And there are some hilarious library-related videos on YouTube, including some by our very own Queen Donna!

Another one, I like a lot is Magnum A.L. from American Libraries magazine.

BTW, there are firms making social software specifically for educational purposes.
It seems to me that students graduating from schools using social software tools like these for education are going to be a lot more savvy about and able to maneuver in the web 2.0 world than those from environments where all of this is blocked.
Posted by Suzanne at 10:54 AM No comments:

Suzanne has mentioned several great tools for designing websites. Many of them have Library 2.0 applications, but how can you combine all these tools and create an interactive and valuable website that is also user friendly? One tool for doing this is Drupal, a content management platform. - Whatever that means :)

Drupal is open source software that will let you create an interactive website of any size. It is not as easy to use as some of the tools that Suzanne has mentioned. It has different layers from fairly simple to complex, but for those of you who want a more robust website it might be the perfect tool. You can learn more about Drupal at http://www.drupal.org.

The Librarian in Black has also recommended LibrarySite 2 from the Cherry Hill Company. The Cherry Hill Company uses Drupal as a base and then works with the library to design a customized website. This is a consulting firm, so there probably is a cost. This may be a better option for academic libraries or large public libraries, but I wanted to mention it. Learn more about LibrarySite 2 at http://www.chillco.com/librarysite2. You can also read the posting from LibrarianinBlack: http://librarianinblack.typepad.com/
Posted by Tracy at 9:09 AM 1 comment:

sharing photos over the internet

Now that so many of us have digital cameras, it's only natural that we want to share our digital photos with friends and colleagues. It should be as easy as emailing the photo from our computer that we took with our camera. Right? Wrong!

Most digital cameras (even cheap old ones like my Fuji FinePix) take pretty detailed photos. The raw photo files are generally in the multi MB range. They're pretty big. If this is a photo of your new grand child that you're sharing with family, who will no doubt want to print it out and keep a copy, that may be okay, they'll probably be willing to sit and wait and WAIT for the photo to download on their 56K dialup. However, if it's the umpteenth photo of your kitchen remodel, this might start getting a bit old. And this is even more of a concern, when you're emailing photos to email lists where you don't even know many of the hundreds of potential recipients.

So, what are your options for sharing great photographs? Online photo sharing sites are always a good. There's lots of them out there. Some require registration to even view the photos, which I find VERY annoying. Probably the most popular one around now which doesn't require registration to view and has a lot of great sharing options is Flickr. Flickr is free for the first 100 MB of uploads per month. You can also pay a fee and get even more uploads. Once you have your photo on Flickr, you can add tags, and mapping information. You can post it to groups. You can send the URL out to friends. They can download copies of the photo in various sizes.

Another option is to do some quick photo editing before you send it by email. If you have Microsoft Office Photo Editor (that came up as the default program when I clicked on this photo on my work computer), there's a compress option where you can compress a photo for email. It creates a thumbnail of the original photo and the size drops from 1.7 MB to 5.65 KB. The resulting thumbnail is bit small but people can get the idea of the photo which is probably all you need, especially if you're sending it out to hundreds over an email list. 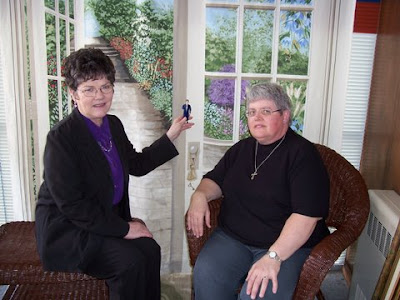 A free photo editing program that's easy to use is Picasa. Once you open your photo in Picasa, one of the options is to email it, it will automatically resize your photo and attach it to an email message using the email program of your choice. The resized photo is perfectly viewable and only 45.2 KB.

Bruce pointed out that Picasa does not presently work on Macs. But no worry, Macs come with their own photo editing software iPhoto that will enable you to resize and/or compress your photos.
Posted by Suzanne at 11:57 AM No comments: