A couple of my friends were talking last evening about iPhones. I heard one ask another why I hadn't talked her into an iPhone and away from a Samsung Galaxy 3, which, btw, I had recommended several years ago. I didn't hear the response. But it did get me thinking about Apple, the appeal of its products and the current controversy with the FBI.

I think Apple products hold a special appeal to people who view technology as a tool that can be used to enhance creativity. That's the market they're appealing to with many of their ads - artists, graphic artists, designers, photographers, filmmakers, musicians, writers, etc. If technology is viewed as an important tool in the creative process, you want it to work consistently. You want it to be maintained and improved on a predictable and on-going basis so that it will continue to enhance rather than distract or detract from your creative process. You don't want to have to spend valuable time worrying about technology or futzing with it. You're probably willing to pay a little more, and customer service like Apple Care and the Genius Bar is invaluable ensuring it all continues to work. At heart, it's a bit of a niche market. But I wonder. It's a comfortable world and easy to get used to. Technology just works. It took me a long time to appreciate that.

The iPhone has confused matters a bit. It's probably the logical choice for someone new to the smartphone market who knows little or nothing and doesn't want to spend a lot of time learning. IPhone is simple and pretty foolproof. But it does tend to be more expensive than its Android counterparts and not as enthusiastically marketed by cellular providers. However, I'd argue, as most don't really do much with their smartphones other than make calls, send and receive texts, take an occasional photo and perhaps check a few apps, it doesn't really make much difference which OS they use. Nor is the issue of privacy terribly important to the average person. They tend to see it in terms of location and call information. I've had several tell me you give that up when you get a smartphone anyway. You give some up when you get and use any cell phone. But the crucial question remains, does it have to be an all or nothing proposition? Shouldn't you be able to choose to keep some information secure and private without having to become a security expert?

To the creative person who uses Apple products including iPhones, privacy and security are about protecting the fruits of their imagination. Their iPhones are likely to be filled with photos, videos, notes: beginnings and continuations of ideas. Who knows what snippets might be misconstrued as having some nefarious intent when taken out of context? Therefore one can appreciate the fact that Apple, the company that provides the tools to aid the creative process, is also showing a dedication to respecting and protecting the content that is produced and stored on those iPhones. This sign of mutual respect will no doubt enhance brand loyalty in the future.

What do you think about Apple's decision to fight the FBI in the courts? Does privacy and security of your mobile devices matter to you? Do you take extra steps to encrypt or in other ways secure your device and/or data?
Posted by Suzanne at 8:24 AM No comments:

Windows 10 - You Will Be Assimilated

Ran across this potentially alarming bit of news last week.

This could be good news if you've been planning to upgrade to Windows 10 and just haven't gotten around to it. But, for many of us, this is not in our plans and an upgrade that's snuck in could have disastrous consequences. For example, if you have older computers running older software. Some of this software may not be compatible with Windows 10. And if you have older peripherals like scanners or printers, they may not have Windows 10 drivers.

So, you may want to choose not to upgrade older computers at all. This makes a lot of sense particularly if you're planning on getting new computers in the next year or so and would like to keep the older ones working in the meantime. Or you may just want to upgrade on your own time schedule instead of Microsoft's. At any rate, it would probably be useful to circumvent their automatic upgrade until you're ready.

So here are some directions and screen shots for how to change your update settings in Windows 7. 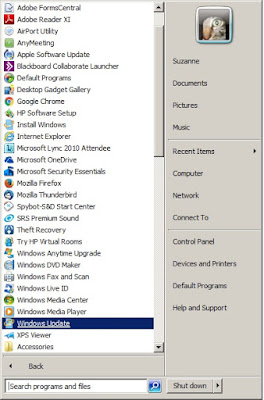 Click on Change Settings from the left hand navigation bar 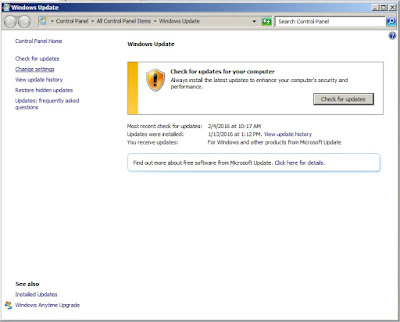 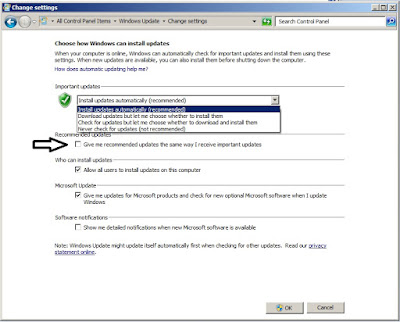 But if you change your automatic updating procedures, do make sure you download and install Windows updates on a regular basis as there are often important security updates included.

Finally, if you DO decide to go ahead and upgrade your Windows 7 and/or Windows 8 or 8.1 computers to Windows 10, be sure to backup your hard drives first. Windows does offer a rollback. If within a month, you decided that Windows 10 is not for you, you can go back to your previous operating system. Microsoft is reportedly keeping a backup of your system for that month. Go to Settings > Update & security  > Recovery. But, it's always good to have your own backup, just in case.
Posted by Suzanne at 1:44 PM 1 comment: